It’s not exactly where the Yankees would like their ace to be with the postseason only a few weeks away.

“We keep looking at everything,’’ Aaron Boone said of why Cole has been hurt with the long ball lately. “I know he’s certainly frustrated by it.”

“Part of it is they’re hunting slug [power] against him and looking for things more than with any other pitcher, knowing they could embarrass themselves or swing poorly at stuff,’’ Boone said of opposing hitters’ tendency to lock in on a particular pitch with Cole on the mound and just go after that.

“Unfortunately, they got two big swings on him today,’’ Boone said of Kolten Wong’s three-run homer in the first inning and Tyrone Taylor’s in the second.

Asked about Boone’s theory, Cole said, “I don’t really have an answer… In some cases, it’s kind of remarkable. I need to be better.”

But he agreed with Boone’s sentiment, overall. 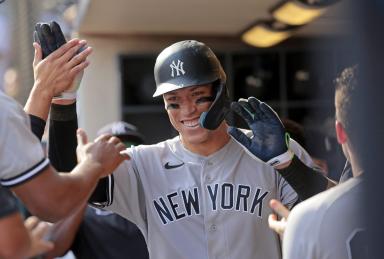 “I think guys are hunting in general, especially this team,” Cole said of Milwaukee, which has the third-most home runs in the majors. “They’re not a high-average team. It’s quite similar to how we score, too.”

Cole allowed four hits and hasn’t given up more than six in an outing since Aug. 3, but there’s no doubt he’s shown a propensity for getting hurt by a couple of big hits per game.

And if Milwaukee is using a hunting strategy against Cole, he knows other teams will, as well.

“We’re getting to the part of the year when everybody’s got their long guns out, looking for October,’’ Cole said. “Maybe I need a little camouflage. I’m gonna have to figure something out.”

He managed to escape more damage in the fifth, after the Yankees took the lead in the top of the inning with four runs and Cole responded by giving up a leadoff double to Taylor and a walk to Christian Yelich.

He followed by getting Willy Adames to hit into a force out and then struck out Rowdy Tellez and Hunter Renfroe to end the inning and his shortest outing since he lasted 2 ¹/₃ innings against the Twins on June 9.