“He changes the whole dynamic of the game,” Pirates manager Derek Shelton said.

Gore has played parts of eight seasons. He has taken just 79 plate appearances — 58 in 2019 for the 103-loss Royals. But on Sunday he stole his 43rd career base. The speedster did more than that — he fittingly changed the tenor of a game.

The Mets had somehow let the sloppy Pirates hang around. Jacob deGrom had dominated the first five innings, striking out 13 of the 16 batters he faced. But to open the sixth the Pirates went single, single and three-run homer by Oneil Cruz to tie the score 3-3 and knock out deGrom.

That was the score when Tomas Nido led off the bottom of the eighth with a single. Shelton knew the implication of giving up a base hit to the ninth-place hitting catcher. That Gore would enter. Shelton countered with lefty Manuel Banuelos, who he said has an excellent move. Shelton said he does not believe that he ordered three straight pickoff throws at any point this season. In fact, Gore said that first-base coach Wayne Kirby alerted him after two throws over that Banuelos was unlikely to try to pick him off again.

To which Gore said, “It’s a little different when I am out there.”

Gore embraces the duel. He studies from foot to head via video the move of every opposing pitcher before a series, paying particular heed to the lefties. He said he had a tell on Banuelos and as soon as the lefty lifted his leg for his first actual pitch to Brandon Nimmo, Gore broke. At his best, Gore said, he ran 40 yards in 4.18 or 4.19 seconds, which would make an NFL combine halt in appreciation. Even now, at 31, Gore’s wheels are such that if he has your move, your catcher has no chance.

Jason Delay tried anyway and sailed a ball into center. Gore took third, he scored the tie-breaking run on Nimmo’s third two-strike single in the game. The Mets would blow it open further aided by two more walks and another Pirate error. All familiar. Pittsburgh is just terrible. The Pirates hit four batters and walked eight in the Mets’ win Saturday night. 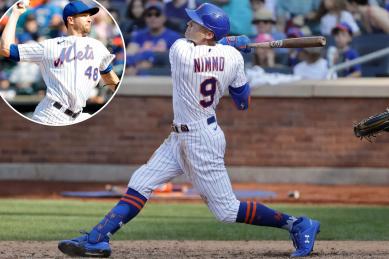 Pete Alonso was hit in the first inning Sunday by Pirates starter Johan Oviedo, who had hit Alonso while a Cardinal last year. It didn’t seem intentional. Most of the 102 hit by pitches the Mets have absorbed this year don’t. But the individual history for Alonso and the collective target practice of these Mets led to Alonso barking at Oviedo and the benches and pens emptying to mill around without punches.

Before this game was over, Pirate pitchers had walked six more, the team committed four errors and Pittsburgh hitters struck out 20 times. Yet, to secure their first four-game sweep since Sept. 9-12, 2019 versus the Diamondbacks, the Mets needed a change of pace.

Which is exactly what they were thinking when they signed Gore in June. At that point, Gore was not even playing organized ball. He was home in Panama City, Fla., with his family; continuing to work with his agility coach in anticipation that the phone would ring. A contender is always looking for the edge that world-class speed offers. Again, this is a unique career. Gore, despite having started just 13 games in his career—– all for those 2019 Royals — has World Series rings from the 2015 Royals, 2020 Dodgers and 2021 Braves.

The closest equivalent to him is probably Herb Washington, a sprinter who unlike Gore could never enhance his speed with the nuances of the game while with the A’s of 1974-75.

Gore spoke with the green sombrero sitting nearby that the Mets players give to the best hitter in their wins. Gore joked that now it has been changed to the best offensive player. But when it comes to alterations, Gore’s concentrating on getting the Mets to tailor their postseason roster to include his skill set. Buck Showalter said no playoff-roster decisions have been made. He acknowledged different pitching needs if the Mets are wild cards and playing three straight days in that round or begin with a Division Series, which has multiple off-days, and would be secured via winning the NL East — and Gore helped them keep a one-game lead over the Braves. Still, Showalter said, “Someone would have to sell me hard to say ‘No [not to have Gore on the postseason roster].’ ”

Gore said, “Oh yeah, for sure,” when asked if he is trying with one speedy step in front of another to force his way onto the postseason roster.

“That’s why I go out there each and every day. I try to change the game. Once I get on. I mean the sky’s the limit.”

Mon Sep 19 , 2022
If you are reading this article then you are more than likely in the semifinals or in the championship of your fantasy baseball league. If that’s the case, make sure you are very strategic with streaming two-start pitchers this week. A solid one-start pitcher is almost always better than a […]