When searching for streamers, it always seems like the best matchups belong to the best teams, whose most productive players are already widely rostered. It may not actually be that way, but it sure seems like it.

At least in part, that apparent trend continues into this weekend. Over the last 30 days, no rotation has assembled a lower ERA than Mariners’ 2.08 mark — and after starting their week by finishing a weekend series against the Angels in Anaheim, they continue their road trip with three games apiece against the Athletics and Royals. Luis Castillo, Robbie Ray and Logan Gilbert are spoken for in virtually every league, as one would expect. If you’re in a shallow league, you may actually have a shot at adding George Kirby (89 percent roster rate on CBS, 72 percent on Yahoo and 61 percent on ESPN). Since June 27, the rookie has allowed more than two runs in a start just once, and that was on Aug. 17 against the Angels, when he was one out short of recording a quality start (three runs in 5.2 innings). With a 1.99 ERA over this 11-start stretch, Kirby has earned a spot in every league, but fortunately for us, he still on waivers in a surprising proportion of them.

The most available Mariners starter is Marco Gonzales, and he lines up to face the Royals next Friday. The lefty has reeled off four straight quality starts, including a strong effort against the Braves on Sunday (one run allowed in six innings on two hits and no walks with five strikeouts). Gonzales has been getting more swings-and-misses than usual over those starts (10.2 percent SwStr%), but he is still allowing too much in-zone contact (90.1 perecent Z-Contact%). Still, if Gonzales is available in any of your leagues with more than 12 teams, he is worth streaming, given the favorable matchup.

Four spots below the Mariners in the starter ERA rankings for the last 30 days are the Cubs — yes, the Cubs — who get three games in Miami, followed by four in Pittsburgh. All five of their starters have a good chance of being available in 12-team leagues, and while Marcus Stroman and Drew Smyly are probably taken in deeper leagues, you could likely still add Wade Miley, Adrian Sampson and Javier Assad just about anywhere, outside of NL-only leagues. I’m still wary of Sampson, even with two starts, given that he has been squeaking by with a 13.6 percent strikeout rate over the last 30 days, but Smyly (21.4 percent strikeout rate, last 30 days) is a legit two-start streamer in 12-team leagues. Miley has been solid in his two starts since returning from the IL (three earned runs in nine innings with 11 strikeouts and three walks), and he should be used for his start against the Pirates in leagues with at least 14 teams.

The Mariners and Cuhs are not the only teams with streamable pitching options this week, giving fantasy managers a number of alternatives to consider. The search for hitters will be a little more difficult, especially if you are looking for an upgrade at either infield corner, but I’ll start with five hitters who could be worth adding.

Bubba Thompson, OF, Rangers: With the way that the Rangers had cycled through left fielders this season, I was skeptical that Thompson would hit well enough to get steady playing time when he was first called up. Apparently, I was not the only one who was slow to add Thompson, despite his .303/.355/.474 line with 49 stolen bases at Triple-A Round Rock earlier this year. He is still rostered in fewer than 30 percent of the leagues on CBS and Yahoo and fewer than 10 percent of ESPN’s leagues. Thompson has been out of the lineup for only five of the 39 games the Rangers have played since he was called up, and a .278 batting average and .331 on-base percentage have been good enough for him to collect 15 steals in 17 tries. The only thing he has lacked is power, but with an average exit velocity on fly-balls and line drives (EV FB/LD) of 94.2 mph, he could still hit a couple of home runs the rest of the way, even though he has hit only one so far with the Rangers. Thompson is a must-add in any league where steals are needed, and he should be rostered in all leagues with more than 12 teams at this point. 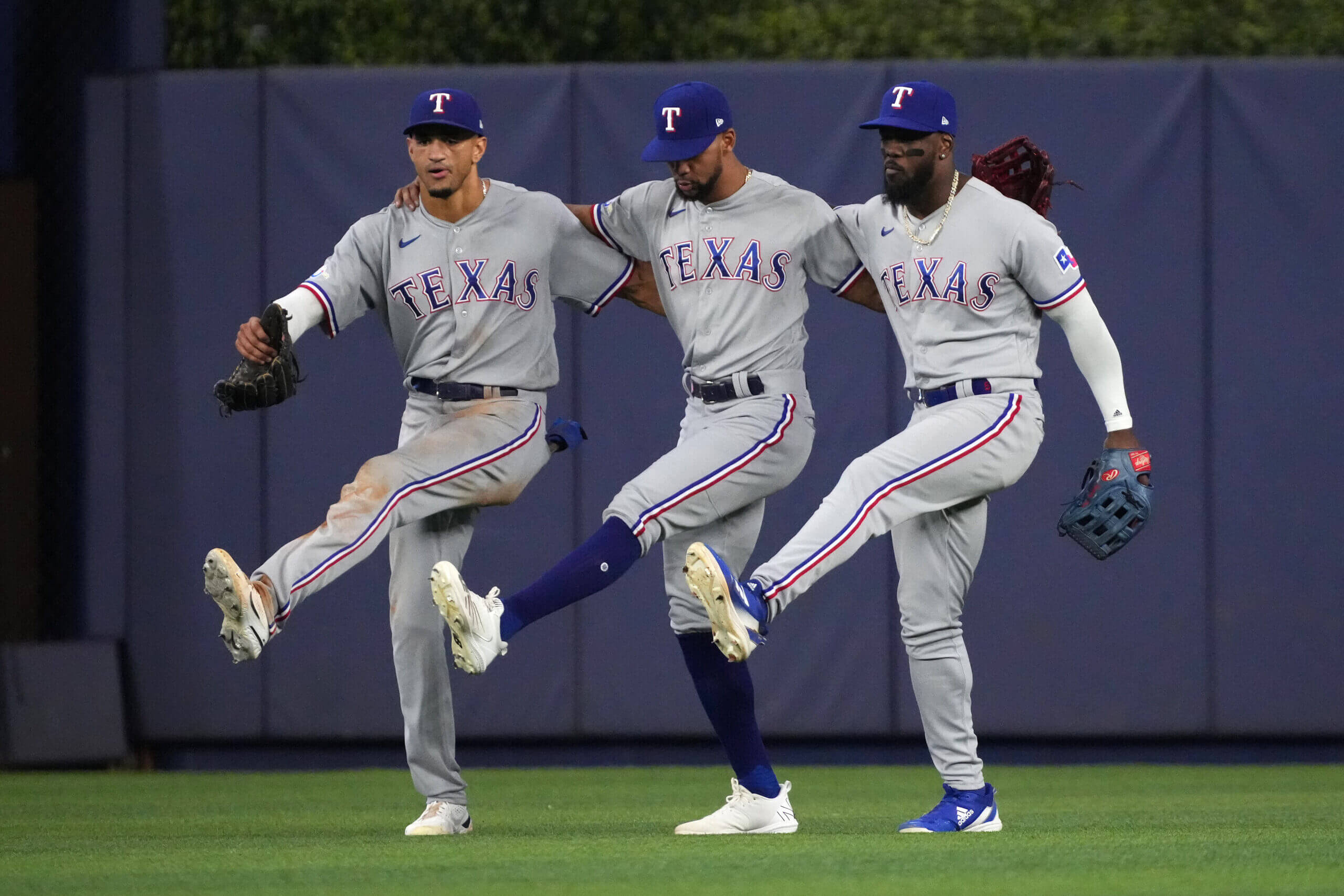 Oscar Gonzalez, OF, Guardians: Gonzalez has been locked in for the last 10 games, going 16 for 40 (.400) with four home runs, 11 RBIs, seven runs and only six strikeouts, and that alone puts him in play for managers in 12-team leagues. Even if Gonzalez starts to cool off, he has value as a compiler who plays every day and hits in the middle of the Guardians’ order. Even a less potent version of Gonzalez should hit for a decent average and provide some extra-base power.

Elvis Andrus, SS, White Sox: When the Athletics released Andrus nearly a month ago, he was already having his best season since 2017, when he batted. 297 with 20 home runs and 25 steals with the Rangers. Ever since the White Sox signed him on Aug. 19, Andrus has been exceeding that high water mark. In 111 plate appearances with his new team, he has hit .308 with six home runs and three steals, while driving in 21 runs and scoring 16 times. The home run total looks a little fluky, given his 5.7 percent barrel rate with the White Sox, but it points to how much Oakland Coliseum had been sapping his power. With the A’s, Andrus had hit a total of 11 home runs in 252 games between 2021 and 2022, but only two of those came at home. Now that he is free of that offense-squelching home environment and installed as the White Sox’s leadoff hitter, Andrus needs to be added in any league with at least 14 teams where he is available.

Aristides Aquino, OF, Reds: In hitting 10 home runs over 204 plate appearances last season, Aquino showed that the late-2019 power display that initially put him on the fantasy radar was not entirely a fluke. The problem with last year’s performance was that it was accompanied by a 36.8 percent strikeout rate and a .190 batting average. Aquino was faring even worse this season with the Reds, batting .170 with a 41.4 percent strikeout rate and only four home runs in 174 plate appearances through Aug. 30. Since then, Aquino seems to have figured something out, as he has gone 17 for 48 (.354) with five home runs and a 21.2 percent strikeout rate. That performance has also earned Aquino the starting right field job. While the Reds have some tough matchups in their series with the Red Sox and Brewers, Aquino should have some opportunities to continue his hot streak, especially given that all six of the team’s games are at home.

Ezequiel Tovar, SS, Rockies: Fantasy managers who stashed Corbin Carroll and Gunnar Henderson in advance of their recent major league callups are now being rewarded, so could finding a space for Tovar pay off similarly? The 21-year-old shortstop is generally considered to be a top-50 prospect but not on quite the same level as Carroll and Henderson, and even more to the point, there is not much season left. MLB.com’s Thomas Harding noted Tovar’s IL activation and promotion to Triple-A Albuquerque on Twitter on Thursday, also adding “the hope is he will finish the season with the #Rockies.”

#Rockies No. 2 prospect SS Ezequiel Tovar has joined the @ABQTopes. Follow his Triple- debut here. Game starts at 6:35 p.m. MT. The hope is he will finish the season with the #Rockies. https://t.co/giU6vZHnY1

So let’s say that Tovar comes up in roughly a week. That would give you the final week-and-a-half to start him, and the Rockies finish their schedule with three games against the Giants and six games against the Dodgers, all on the road. Tovar has power and speed, as evidenced by his 13 home runs and 17 steals in 66 games with Double-A Hartford this year, so he has some appeal for 15-team leagues, but most fantasy owners can look elsewhere for help during the stretch run.

José Suarez, SP, Angels: I rarely write about the same player on consecutive weeks in this column, but I would be remiss to not recommend Suarez again this week. He has a 2.14 ERA and an 0.99 WHIP in the second half, and Suarez has now posted eight straight starts with no more than three runs allowed since the All-Star break. While Suarez won’t likely maintain an 82.2 percent strand rate or .260 BABIP over his remaining second-half starts, he has done what you want to see from any pitcher: get whiffs (12.0 percent SwStr%), chases (39.0 percent O-Swing%) and plenty of soft contact (5.2 percent barrel rate). It also doesn’t hurt that Suarez has a two-start week in store, and while the  Mariners are a dangerous opponent, he’ll also face a Twins lineup that has not been prolific in recent weeks. He can be started in all but the shallowest leagues.

Brayan Bello, SP, Red Sox: Now that Yankees’ bats have woken up, a two-start week that has Bello facing them plus the Reds on the road may not look enticing. We shouldn’t be starting Bello for his matchups, though, but rather for his excellent work in five starts since getting activated from an IL stay for a strained groin. Across those 25.1 innings, Bello has struck out 27 batters while not allowing a single home run, thanks in part to a 51.4 percent ground ball rate. While Bello’s matchups do present some risk, he is still worth considering in 12-team leagues this week.

Tyler Wells, SP/RP, Orioles: Between a six-week absence for a side injury and a four-start slide prior to his IL stint that raised his ERA from 3.09 to 3.90, Wells’ fantasy popularity has fallen sharply. His two starts since retuning to the Orioles’ rotation have produced a 4.50 ERA (three runs in six innings), but Wells has been hard to hit, with a 15.5 percent SwStr% and 71.4 percent Z-Contact%. Wells did last four innings in his last start against the Nationals, and now he is heading into a two-start week that begins with a home outing against the Tigers. Granted, he will finish up against the Astros, but he is still a good bet to provide at least one win and several innings with a low WHIP (he has a 1.10 WHIP on the season.). If those are things you could use, you can consider adding Wells in 12-team leagues this week.

Ryne Nelson, SP, Diamondbacks: Nelson’s first two major league starts were the inverse of Wells’ last two starts. He did not give up a single run over 13 innings against Padres and Dodgers, even though he had a merely decent 10.7 percent SwStr% and a subpar 27.7 percent O-Swing%. Nelson has simply thrown a lot of strikes and avoided getting barreled on the 32 batted balls he has allowed. While that could eventually be a dangerous proposition, given that Nelson allowed 25 home runs over 136 innings at Triple-A Reno this year (1.65 HR/9), he should be safe to stream against the Giants, who have recorded the majors’ third-lowest wOBA (.284) over the last 30 days. With similar matchups, I would actually prefer fellow Diamondbacks pitching prospect Drey Jameson, who made a spectacular debut against the Padres on Thursday, due to his strong ground ball tendencies. However, it’s Nelson I would trust this week in leagues with 14 or more teams, as Jameson is on track to start against the Dodgers for his next outing.

Note: Season-to-date stats are for all games played through Thursday, Sept. 15.

Don't be in rush to play J.K. Dobbins

Sat Sep 17 , 2022
By nypost.com Regina George is gonna be so mad. Rachel McAdams’ protagonist in the 2004 film “Mean Girls” did not take kindly to efforts by Plastics pal Gretchen trying to start a trend and get her slang use of “fetch” to become hip, because that would be “so fetch.” Gretchen […]