Sunday I was trapped in a Edgar Allan Poe tale. Or was it a Hitchcock movie? The torment grew until my soul shattered, then, wild-eyed and shrieking, I spat hideous cackles, my mind shoved off a cliff to the sea-splashed boulders below.

Dottie Pepper had pushed me beyond the limit.

Sunday, near the close of a weekend that had again left me on the precipice of insanity-by-TV-consumption, Pepper, the CBS golf commentator, delivered the coup de grâce. Rory McElroy had just three-putted when she said, “Three-putt avoidance has been a problem.”

Three-putt avoidance? Is that anything like three-putting? My tipping point had been surpassed, advanced sanity was beyond avoidance!

In the conspiracy to get me, to drive me nuts, Pepper had help.

In his eighth year with Fox, John Smoltz is less analyst than hypnotist, leaving audiences in slack-mouthed trances. Without fail he performs an autopsy on every pitch — all in the key of blank monotony. Fox either believes we enjoy this or its shot-callers haven’t bothered to listen to him since 2014.

He’s another Poe torment. “Once before a ballgame dreary … ” By the second inning, Smoltz fuels the compulsion to see what’s on among infomercials and month-old, one-camera municipal board meetings. Fox has exhibited no evidence that it has tried to convince Smoltz toward an occasional changeup, like taking a pitch off. 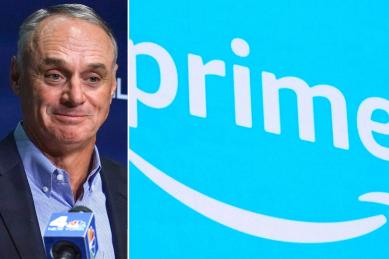 Rob Manfred has to realize streaming is killing MLB viewership

And so Saturday’s Cubs-Yankees, a scheduled big-TV-markets national stinker won by the Yanks, 8-0, following the peek-a-boo exclusive streaming of Cubs-Yanks the night before, was another in the Tales From the Cryptocurrency weekend horror series.

Friday night the Mets and Yanks played exclusively within streaming-bait caves covering New York, Chicago and Los Angeles, providing national equity to the continuing self-immolation of The Game, betrayals that a year ago would have been rejected as impossibly bad science fiction.

Ghouls, that’s what they are, ghouls! Small wonder that under the evil spell of Rob “The Impaler” Manfred we now have games determined by “ghost runners.”

But for sweaty night tremors, there is nothing more terrifying than ESPN. Doesn’t matter the sport, ESPN, from its laboratories deep in the foreboding forests of Bristol, Conn., will perform its gory disembowelments.

Did anyone at ESPN in a position higher than assistant vending machine room attendant consider that the moment the puck was dropped to start Rangers-Lightning Game 6 on Saturday, we’d have liked to focus on the game?

But when that moment arrived, ESPN posted a long scroll of distracting photos, names and positions across the top of the screen identifying every player dressed for the Rangers.

This was similar to my father’s demand to know: “Why didn’t you go to the bathroom before we left?” Followed by 40 years of my asking why networks wait until after kickoff to remove the field from view to show starting lineups, several starters already removed.

Ah, but soon there was a whistle, thus ESPN would present Tampa Bay’s dance teams during dead time. OK, half bad isn’t bad for ESPN.

But ESPN waited until play resumed before resuming its discriminately indiscriminate graphic intrusions! Madness! They’re out to get us! All of us!

We were haunted, beginning to end. And if there’s one thing ESPN learns from its most neglectful mistakes, it’s to repeat them.

Having blown the handshake line shot of former punches-thrown teammates Tony DeAngelo and Alexandar Georgiev just as they reached each other after the Hurricanes-Rangers series, ESPN could not possibly miss the greeting exchanged between starring goalies Igor Shesterkin and Andrei Vasilevskiy at the close of Saturday’s series.

But ESPN did just that! 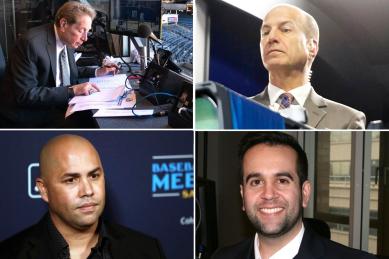 ESPN doesn’t need guidance, it needs an exorcism! Or we do.

Then Sunday’s Cubs-Yanks, another bad joke co-starring one of many dreadful MLB teams — the Yanks won, 18-4, Manny Banuelos with the save for the “Clean up in aisle in seven!” — was narrated in large part — too large — by Carlos Beltran, who has flipped on his YES creators to destroy whatever credibility they imagined they had.

In the first inning, after Ian Happ hit a solo homer for Chicago, to which Michael Kay said, “1-0, Cubs,” Beltran added, “Happ has given the Cubs the first run of the game.” Standard Beltran enlightenment, more to follow.

Take it, Edgar Allan: “Tapping, tapping at my chamber door …” I was on the precipice of a sheer drop from sheer madness. I wondered if Smoltz, on the replay of my descent, would call it a cutter or a sinker.

And so late Sunday afternoon, “Three-putt avoidance is a problem” became the final terror. Got it now? I was tormented, driven to lunacy! Dottie Pepper did this to me!

By the way, can one operate the TV remote while in a straitjacket?

For 30-plus years I’ve been tracking and often chronicling the escalating assaults on rec league and kids’ league game officials by adults. All of it falls under the general heading of can’t-expect-better growing incivility and criminality in organized sports.

Thus it was both shocking and unsurprising — if such is possible — that a 72-year-old ump with 40 years experience had his jaw broken by a punch thrown by a parent-coach in a 13-and-under U.S. Amateur Baseball League game this past Saturday in Jersey.

The accused, a man from Staten Island, first cursed the unnamed umpire then, after punching him, drove off in a truck. The episode remains under investigation, though the S.I. team has been banned from again competing, relegating kids to serve the sentence. 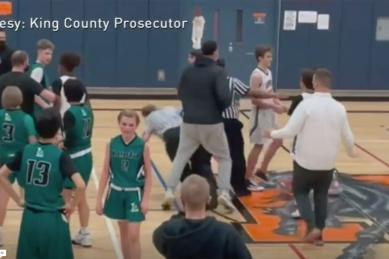 But what was both surprising and shocking was that several reports of the assault in part blamed COVID cabin fever for the attack, as if adults unable to contain themselves while overseeing children at play is a side effect. Why not blame Putin?

The steady rise in assaults on game officials that’s causing the steady decline of credible umps and refs to replace them has been a constant, again, for over 30 years.

In baseball’s case, MLB has a commissioner and a TV network that, instead of encouraging civility between teams, encourages individual acts of incivility and excessive, antagonizing immodesty — from bat-flipping, to voguing at home plate rather than running to first base, brawls often to follow.

What commissioner Rob Manfred, I presume, wouldn’t teach to the kids in his life, he’s eager to have taught to the kids in ours. Same goes for TV networks. The cumulative effect of bad-is-good marketing shows up everywhere. And as kids raised on bad-is-good become parents, well, put it this way:

When we were kids, cops weren’t called to kids’ games. And there was no need for police in cruisers to patrol them. Now? Pathetic, isn’t it? And plenty more to come.

Good read by Hall of Fame jockey Jerry Bailey on NBC on Saturday, just before the Belmont, on 5-2 favorite Mo Donegal: He’s “a classic Belmont [long-distance] horse,” “a grinder” that will hang with the pack then make his move about halfway, which is what he did to win by three lengths.

Throwback Friday: Mets on Ch. 11, Yankees on YES. Much like it was way back in 2021. While Sox-Astros then Guardians-Dodgers, covering the second, third and eighth top TV markets, receive Friday’s dreaded Apple+ Manfred exclusive treatments.