BROOKLINE, Mass. — Rory McIlroy is sick and tired of his major championship drought, which dates back to his 2014 victory at the PGA Championship.

That PGA victory came just a month after his 2014 British Open victory, and it gave him four major championships at the age of 25. At that point, there was talk in golf circles that McIlroy was on the chase after Tiger Woods for majors and double-digits seemed imminent.

But McIlroy has been starved for a fifth since, stuck on four. He’s now 33 and married with a child. Since that ’14 PGA, he’s played in 28 majors without hoisting a trophy.

He figures it’s time to end that drought.

McIlroy’s passion was on full display in Thursday’s U.S. Open first round at The Country Club, where he posted a 3-under 67 to stand just one shot out of the lead held by Canadian Adam Hadwin. 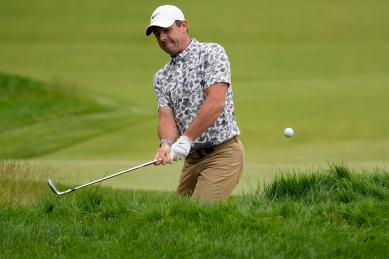 Rory McIlroy has bunker meltdown at US Open

Clustered on the leaderboard alongside McIlroy at 3-under are a number of players you might not have realized were in the field (or heard of for that matter) — Callum Tarren, David Lingmerth and MJ Daffue. Joel Dahmen are also 3-under.

McIlroy showed his emotions on the fifth hole, where he drew a horrible lie in thick rough at the edge of a bunker and fluffed a poor shot out of it and into another bunker. That was followed by the Northern Irishman twice burying his wedge into the sand with tomahawk chops.

On No. 9, his final hole of the round, McIlroy whipped his club to the ground after pushing his approach shot into the right greenside rough, from where he would take bogey to end his day.

“It’s been eight years since I won a major, and I just want to get my hands on one again,’’ McIlroy said. “A really solid start. You’d take 67 around this golf course any day. Even though I’m standing up here slightly frustrated that I bogeyed the last, it’s a great start to the tournament.’’

For McIlroy, one of the most respected players in the game, the club abuse was uncharacteristic.

“You’re going to encounter things at a U.S. Open, whether they be lies or stuff like that, that you just don’t really encounter any other week,’’ McIlroy said. “It’s hard not to get frustrated, because I’m walking up there going like, just come back into the bunker. The thickest rough on the course is around the edges of the bunkers. 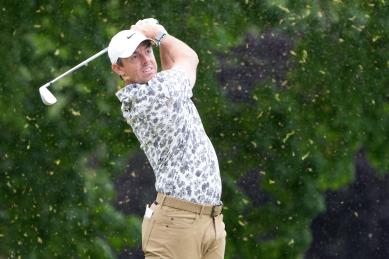 “So, I was sort of cursing the USGA whenever I was going up to the ball, and then yeah, but it’s one of those things it happens here, it doesn’t really happen anywhere else. You just have to accept it. I gave the sand a couple of whacks because I’d already messed it up so it wasn’t like it was much more work for Harry (Diamond, his caddie). Then I just reset and played a decent bunker shot, and then it was really nice to hole that putt [for par].’’

McIlroy said those club-abuse reactions “almost remind yourself sometimes how much it means to you.’’

The strong start is reverse to a pattern McIlroy has had in a lot of majors, when he would start poorly and chase, often finishing with a good result on paper thanks to a very low final-round score after he’d been too far out of the hunt to win. A recent example of that was the 64 he shot on Sunday of the Masters to post a runner-up finish even though he was miles from contention to start the day.

“You feel like you’re right in the tournament from the start of the week, which is nice,’’ he said of Thursday’s round. “I’m going into [Friday] with the mindset of ‘let’s keep it going,’ rather than ‘where is the cut line’ or whatever. If you don’t get off to a great start, those thoughts start to creep in.

“It’s certainly a different mindset when you get off to a good start.’’

He knows others got off to strong starts and there are at least 54 trying holes to play before he can put an official end to his major drought.