Latest News
Home /Stephen Curry’s will was the difference for Warriors: ‘He wasn’t letting us lose’

If one word summed up the Warriors’ 107-97 win over the Celtics in Game 4 of the NBA Finals, it was ruthless.

Stephen Curry willed himself through a sprained foot to carve up the Celtics’ league-leading defense. Coach Steve Kerr made the tough calls, such as pulling likely Hall of Famer Draymond Green for the pivotal fourth-quarter run.

And Golden State came from behind in that fateful final period, erasing a five-point deficit to wrest home-court advantage back from Boston.

“The heart on that man is incredible,” Klay Thompson said of Curry.

It wasn’t Curry heart that was in question, but his left foot.

When Curry had been screaming during the fourth quarter of the Warriors’ loss Wednesday in Game 3, it was from pain after his left leg was rolled on. But on Friday his bellows were victorious roars. He was unusually demonstrative as he gutted his way to 43 points, 10 rebounds, seven 3-pointers and one MVP-worthy effort to carry his team.

“Felt like we just had to let everybody know that we were here: Whether that’s their crowd, their team, our team, whoever wants to see that energy and that fire, we feed off of that. Yeah, I think it helped us,” Curry said.

“He wasn’t letting us lose. That’s what it boils down to. You hear all the noise for a day or so, and I could tell in his demeanor the last couple days, even after Game 3, that he was going to come out with that type of fire. He did, and we were all able to follow it,” Green said of Curry. 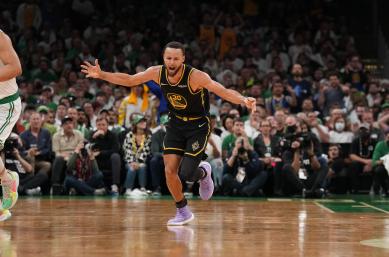 “Incredible. Put us on his back. Willed us to win, much-needed win, game we had to have. Came out and showed why he’s one of the best players to ever play this game. … [He’s] one of the most resilient, toughest guys I’ve ever played with.”

The Warriors needed every iota of what Curry gave them, coming into the night trailing 2-1 and locked in a nailbiter with 10 ties and 11 lead changes. He provided the last one: Golden State was down 94-92 before he found Thompson for a go-ahead 3, then hit a driving floater and finally a step-back 3-pointer for a 100-94 cushion.

Facing a must-win game and the league’s best defense, the Warriors showed toughness. Even Kerr, who couldn’t hit a shot or grab a rebound, made the tough decisions.

First he benched Kevon Looney from the start for Otto Porter, trying to open up space for Curry. And after Green’s ongoing struggles continued, Kerr pulled the three-time champ with 7:32 to play and Marcus Smart on the line ready to give Boston a 91-86 lead.

“We understand it’s just about winning. At the end of the day, all decisions are predicated on that being the goal,” Curry said. “And we’ve all been on the side where it doesn’t go your way, from the top all the way to the bottom. It’s not fun. It’s not something you readily accept. But you understand the big picture.”

The big picture is winning.

The Warriors immediately ripped off an 11-3 run before Green finally returned with 3:41 left. And he spent the rest of the night tag-teaming with Looney, going offense-defense the rest of the way.

“I’m definitely never thrilled coming out of the game with seven minutes to go in the fourth quarter in a must-win game. I’m not going to sit here and act like I was thrilled. I’m a competitor,” Green admitted. “But at the end of the day, if that’s what coach decides, then you roll with it. I had to keep my head in the game, and whenever I went back in, try to make some plays.”

Green finished with two points on 1-for-7 shooting, and a plus-0.

Looney repaid Kerr’s tough decision with six points, 11 boards and a game-high plus-21.

“Look, this is a tough series for him to score because of Boston’s size and athleticism, but he’s still impacting the game at a huge level. And he knows we’re going to do whatever it takes to win,” Kerr said. “And whatever it takes in Game 5, that’s what we’ll do, too.”