It is a matter of public record that the New York Football Giants once had employees named Vince Lombardi, Tom Landry and Bill Belichick leave their organization without being offered the position of head coach. That fact might be a necessary source of consolation to the Nets if Ime Udoka turns out to be a superstar they let get away.

The Nets spent so much time and energy last year on their Big 3 of Kevin Durant, Kyrie Irving and James Harden that perhaps they lost sight of the fact that there was really a Big 4 everybody missed. Once more with feeling, either Nets general manager Sean Marks and owner Joe Tsai didn’t know that Udoka was special, or did know that he was special, but lacked the do-whatever-it-takes nerve to replace head coach Steve Nash with his assistant before said assistant jumped to the division rival Celtics, who now stand three victories away from an NBA title.

Neither explanation is any good.

But here we are, one game deep into the Finals, and it’s already clear that the 44-year-old Udoka, also a former Spurs and 76ers assistant, should have been a head coach a long time ago. His Boston Celtics ambushed the Golden State Warriors in the fourth quarter of Game 1 of the NBA Finals on Thursday night, draining 3s from everywhere to turn a double-digit deficit into a double-digit victory and, temporarily anyway, mocking the notion that all of that Stephen Curry-Klay Thompson-Draymond Green championship muscle memory would overwhelm the Celtics when it mattered most.

It’s quite possible that Golden State’s successful strategy against Boston’s Jayson Tatum, who missed 14 of 17 shots, will hold up over the balance of the series, and that the Warriors will recover from their stunning collapse and win their fourth title in the past eight seasons.

It’s also quite possible that the Celtics’ ability to win Game 1, despite an off night from their best player, will embolden them to win the franchise’s 18th title, breaking their historic tie with the Lakers. 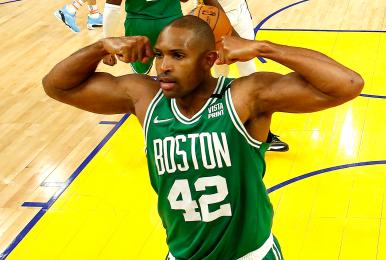 Either way, Udoka has already earned his standing among the very best coaches in the league. He took a Boston team that, under Brad Stevens, was a monument to mediocrity last year (36-36 in the regular season) before being bum-rushed out of the first round by Nash’s Nets, and coached it into the current juggernaut that humiliated Nash’s Nets in a first-round sweep and then won Game 7s against the defending champion Milwaukee Bucks and the top-seeded Miami Heat.

No rookie coach had ever won a pair of Game 7s. Though Stevens helped the cause from his front-office suite by shipping out Kemba Walker in the Al Horford deal and by acquiring Derrick White, Udoka pulled this off with the same holdover central cast of Tatum, Jaylen Brown, and Marcus Smart. How?

“We look at ourselves as a unit,” Udoka said. “A complete team. We look at the other teams, Brooklyn with Durant, the Bucks with [Giannis] Antetokounmpo, Miami with [Jimmy] Butler. We pride ourselves on being a team that plays together.”

Basketball people like to refer to players who seem to be invested in one another as “connected.” The Celtics are connected. Udoka helped Tatum and Brown find their sweet spot as a tandem, helped Boston become a defensive force, and helped Smart become the best stopper in the sport.

It wasn’t easy. The Celtics lost half of their first 50 games, inspiring doubts about whether their two offensive stars would ever figure it out, and about whether the rookie coach was the right voice in the huddle. Then they won 26 of their final 32 games, and did absolutely nothing to avoid the Nets in the opening round.

Boston didn’t just notarize itself as a legit contender in that sweep. The Celtics also exposed every major and minor flaw up and down the Nets’ organizational flow chart, forcing Brooklyn’s elders to do extensive soul searching and to confess publicly that their culture was all screwed up. Marks all but challenged Kyrie Irving to a duel, which should make for some fun summertime reading.

If the Celtics win it all, Udoka will join his opponent, Steve Kerr, and Nick Nurse and Tyronn Lue as head coaches who won titles in their rookie seasons, and he will match Red Sox manager Alex Cora as a Year 1 champ in Boston. But even if Kerr’s Warriors prevail, Udoka’s game-night approach (best described as projecting a vibe of quiet strength) and ability to motivate and adjust should make the Celtics’ coach a big sideline star over the long haul.

And that isn’t good news for any Eastern Conference rival, especially the Nets, who just might have let a Lombardi, Landry, or Belichick walk out the door.