Andrew Wiggins earned the right to say “I told you so,” and his father took full advantage in the wake of the NBA Finals.

Speaking on his ESPN podcast with Brian Windhorst about an hour after the Warriors’ decisive Game 6 win over the Celtics on Thursday, Zach Lowe mentioned that Wiggins’ father, Mitchell, approached him and asked him to eat some crow.

“Oh!” Lowe said, as Windhorst talking about Wiggins’ performance set off a light bulb in his head. “Mitchell Wiggins came up to me about an hour ago as we were coming down to the floor, saying, ‘I guess you’re gonna start writing nicer things about my boy now?’

“And I say, ‘Hey man, I’ve written nice things! I thought [the Warriors] won the trade right from the beginning!’”

Mitchell Wiggins played parts of six seasons in NBA between 1983 and 1992 as a member of the Bulls, Rockets and 76ers. 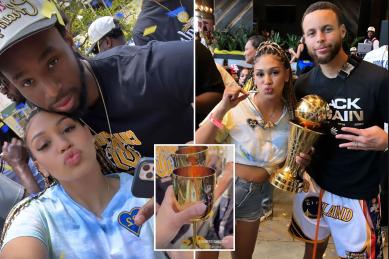 Andrew Wiggins was a key contributor to the Warriors’ NBA title; while he was the first overall pick in the 2015 NBA Draft, he was a reclamation project by the time the Timberwolves traded him to Golden State for D’Angelo Russell during the 2019-20 season.

In 2018, Lowe wrote that Wiggins “has shown zero meaningful improvement over four seasons. If anything, he has gotten worse.”

Lowe continued to emphasize the attributes Wiggins was lacking on the court.

“Motion-tracking cameras recorded Wiggins ‘running fast’ during only 4.8 percent of his time on the floor, one of the 10 lowest such figures in the league, per Second Spectrum. (Almost everyone in his slowpoke vicinity is a plodding 7-footer.) He has shown no aptitude on pull-up 3s, or on any sort of 3-pointer outside the corners — and he doesn’t shoot enough from the corners. Nobody guards him away from the ball,” Lowe wrote.

“His pick-and-roll work is rote. He still doesn’t know how to run his defender into screens. He’ll peek around a pick, only to moonwalk uselessly into a long jumper. Even when he has an advantage, he’ll stop short.”

In the evaluation, Lowe did tout Wiggins’ athleticism and account for the possibility that he could blossom.

Lowe’s account that he had already pivoted to covering Wiggins positively, well in advance of Golden State’s championship, is accurate.

Last year, on a podcast with Bill Simmons, Lowe took a victory lap over correctly predicting that the Warriors won the trade with the Timberwolves.

Negative news tends to spread much farther and wider than positive analysis in the sports world, and there is also oftentimes a game of telephone at work. So it’s possible those in Wiggins’ orbit haven’t noticed a change in Lowe’s coverage.