As the clock approached 11 p.m., pitcher Ron Marinaccio stirred in the Yankees’ bullpen and his mother stirred on the couch at home in Toms River, N.J.

“Wake up!” Ron’s father told her, with a sense something special might be about to happen as their son loosened up his arm. “He’s coming in.”

Renee and her husband — also named Ron — watched their son shut out the Cubs in the top of the 13th inning Friday night, then mustered the late-night energy to high-five after Jose Trevino’s RBI single in the bottom of the frame gave their son the first win of his MLB career.

“I knew he was coming into a tie game and had an opportunity for his first win,” the elder Ron told The Post. “I was praying for a [game-winning Yankees] hit.”

Marinaccio’s parents, brother and fiancée make the trip across the bridge as often as they can to watch the rookie who grew up as a Yankees fan at the Jersey Shore. All four skipped the trip Friday with no way to know it would be a game to remember. Marinaccio was the sixth reliever used in what was only the seventh MLB game to last 13 innings since the addition of the extra-inning ghost runner in 2020. 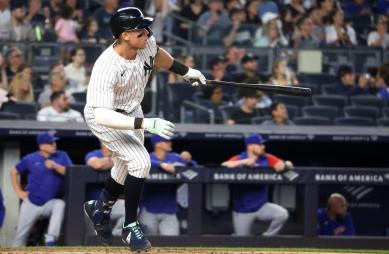 “They sent me a text and then I’m sure they fell right back asleep,” Marinaccio joked of his parents. “But they were all excited in the morning.”

Indeed there was a buzz Saturday at a fundraiser in Toms River, at which fellow residents sought out the Marinaccios to offer congratulations.

“It wasn’t a normal day,” Renee said. “Our phones have been blowing up all day and overnight.”

Because he left the mound with no way to know he was about to be the winning pitcher, Marinaccio didn’t pocket the game ball as a souvenir. He is hoping to get the lineup card to frame and match the one resting at the foot of his locker from his MLB debut on April 9. 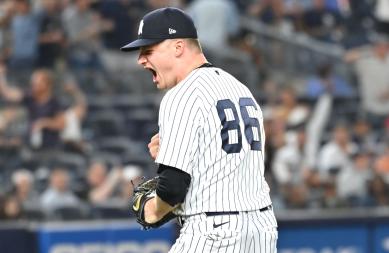 “First win is definitely a big accomplishment,” Marinaccio, who will turn 27 on July 1, said, “but I’m more excited to start feeling a little more comfortable and help the team win. The guys here were great about it: Everybody congratulates you on the first one.”

After he walked two batters and hit another in a rough outing May 29 against the Rays, Marinaccio has rebounded with four scoreless innings, including following up Friday’s win by retiring three of four hitters faced in the Yankees’ 8-0 win over the Cubs as he pitched on back-to-back days for the first time.

“You have to be able to handle failures and adversity,” manager Aaron Boone said. “That’s the mark of being able to stay here, because it’s going to happen. He goes through an outing like that and he’s not shell-shocked by it. He’s pissed about it, which is a good reaction because he’s confident in his ability. He’s done a great job, and I think he’s somebody that has a chance to have a long career up here.”

Marinaccio, who is used to pitching in lopsided games as the last option in the bullpen, learned from his struggles in a rare big spot to be more aggressive early in the count and use his fastball. The top of the Cubs’ lineup paid the price for the Rays’ success.

“I talked to a couple people as soon as I came out of that one and I was like, ‘I wish I could just go out there and do that again,’ ” Marinaccio said. “That was tough having to sit on that one. I was a little too passive and tried to be a little too perfect because it was one of the biggest situations I’ve been in so far. I took some time to reflect on it and say, ‘Trust your stuff a little bit more.’ Got a better result [Friday] night.”