White Sox owner Jerry Reinsdorf always told folks his greatest regret was firing Tony La Russa back in the ’80s, understandable since La Russa wound up winning three World Series, getting to six, and carving out a Hall of Fame managing career in Oakland and St. Louis.

But the way things are going on Chicago’s South Side, Reinsdorf’s second greatest regret may become not firing La Russa a second time.

(Reinsdorf said through a spokesman he isn’t planning on commenting on La Russa or the team at this time.)

The White Sox owner remains the most famously loyal team owner in sports, and the suspicion for now is he will stick with La Russa. Normal circumstances dictate some breaking point, but this is about two lifelong friends who are uber successful and equally headstrong, so who knows?

Warning to Sox fans: Sources say La Russa’s deal, at about $3.75 million annually, extends into next season, too.

The South Side faithful have begun to chant “Fire Tony,” a catchy shorthand request. But beyond the fact that that’s our job, a more dignified sendoff is probably in order for arguably the greatest manager over the past half century. While he’s related well to players at 77, his in-game decisions are growing bizarre. And at some point, reasonably, it must be stopped.

The White Sox stand as MLB’s most disappointing team, and in Chicago, the sad thing is they remain that wonderful city’s only baseball hope. Unlike their counterpart Cubs on the North Side at least they have one thing going for them: It’s early. The Cubs, who just left town after being outscored this weekend 28-5 by the Yankees, also left quite an impression of ineptitude.

As awesome a baseball summer as the one that’s coming in New York, that’s how awful things could get in Chicago. The 23-36 Cubs are as dreary as the third-place 27-31 White Sox are disheartening. 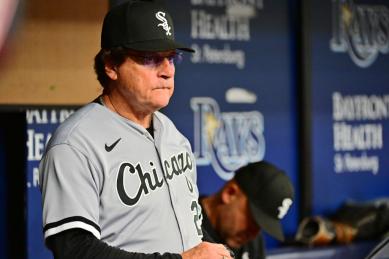 Chicago is such a great sports town with fans smart enough not to be fooled by the unserious way the Cubs approached the first winter after they sent away three heroes who broke their World Series jinx after 108 years — Kris Bryant, Anthony Rizzo and Javier Baez. At best they performed a substandard patch job, signing mostly players no one else wanted. On the plus side, at least, they are short-term deals.

A team with this history and fan base — and these revenues — should not be undergoing yet another major rebuild.

“They figure they got their World Series,” said one rival executive. “And now they have another hundred years to get another one.”

Poor David Ross, one of the game’s better personalities, who has no chance. He was given a one-year extension in spring, which by now seems more punishment than reward.

Their best player, Willson Contreras, is sure to be dealt by the Aug. 2 deadline, and so might Ian Happ, Kyle Hendricks and David Robertson in a second straight extreme sell-off.

Unfortunately, that could be the excitement for the summer if the Sox can’t get their act together. Seen originally as the most prohibitive division favorite, they stand as baseball’s biggest flop among would-be contenders now that the Phillies are on fire since hiring relaxed Rob Thomson to replace intense Joe Girardi, the former Cub.

Coincidentally, both managers fired so far have strong Chicago ties, with Joe Maddon, who memorably managed the magical 2016 championship Cubs team, also getting the boot. So naturally South Side fans, noticing the trend, have started to hint regarding La Russa.

One big issue is obviously an offense that’s mostly AWOL, with a 27th best .664 OPS. Injuries have been a pain after years being better than most at avoiding them, but underperformance is the killer, with almost no one beyond Tim Anderson meeting expectations.

He’s managed so poorly he should be relieved there’s no mechanism to remove someone from the Hall. Of course he outdid himself with the latest strange move, ordering that intentional walk to Trea Turner on a 1-and-2 to count so he could use the left-handed Bennett Sousa to face the lefty hitting Max Muncy, who promptly hit a game-winning homer.

Worse, La Russa responded to obvious questions about the nutty call with indignant gibberish, citing statistics that do not exist to support an unsupportable case.

Turns out, as one might suspect, like everyone else Turner doesn’t hit much at 1-and-2, with a career slash line of .197/204/.304 in such circumstances. And Muncy hits about as well versus lefties as righties.

In his day, La Russa famously snapped at reporters. But invariably, he had the goods. Back then he knew the game, and the numbers, better than anyone. Now no one thinks he should be managing, except perhaps one person, the one who counts.