TORONTO — Tino Martinez has paid attention to the Yankees from afar over the last few seasons and has noticed something different about the 2022 version — one that makes it understandable why they are drawing comparisons to the 1998 team that won 114 regular-season games en route to a title.

“They look like they’re on a mission,’’ Martinez, the first baseman on that 1998 team, said Saturday by phone from Tampa, Fla. “We had the same mindset that year. It didn’t matter if we were up 20 games or whatever in July. We wanted to go up 30 [games]. We knew we had to keep pushing and not just cruise to the end of the regular season.”

Similar to this year’s team, the 1998 squad didn’t come out of the gates firing on all cylinders. They lost three of their first four games before winning 14 of their next 15.

They built an 11-game lead in the AL East through 58 games — about a week before this 2022 team did the same thing.

By the end of June, the 1998 Yankees never led by fewer than 10 games and their lead eventually grew to 22 games in September.

This year’s version entered the game Saturday against the Blue Jays with a 48-16 record through 64 games, the same as those Yankees and the best in the majors since the Mariners opened 50-14 in 2001. 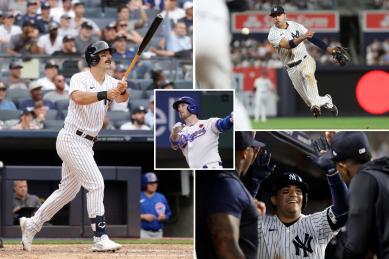 The Yankees have shown few signs of slowing down this year, they had won 15 of 16 games and has outscored opponents 107-38 during that stretch.

All of it hearkens back to 1998, Martinez’s third season with the Yankees.

“It was a great year and it seemed like we were winning every single day,’’ Martinez said. “It’s hard to keep up that pace.”

He said he believes there are some signs that the Yankees can keep up their current pace.

“They’re hitting the ball all over the place and playing with confidence,’’ Martinez said. “They’re just piling up wins.”

And their 19 comeback wins also lead the majors.

“There’s a different aura about this team than the last few years,’’ Martinez said. “They seem like they can win every game even when they’re down in the seventh, eighth or ninth. That wasn’t the case last year. This team always makes something happen. You expect it. That ’98 team had the same attitude and it wasn’t one or two guys. It’s not just [Aaron] Judge and [Anthony] Rizzo. It’s guys like [Jose] Trevino, like we had with [Luis] Sojo.”

Martinez, however, knows this team’s legacy can’t be built in June or July.

“No matter who we played, we wanted to just keep winning and overwhelm opponents and not just win the division,’’ Martinez said. “But you always know the goal is to win the World Series. You don’t want to be Seattle [in 2001], win 116 games and lose in the playoffs and no one remembers you.”

Though this team doesn’t have the championship pedigree of 1998, a team that already had won the World Series in 1996, Martinez thinks the 2022 Yankees have been constructed the right way.

“They’re defense-first,’’ Martinez said. “That’s what you need to win in the postseason.”

Before they get there, though, they have plenty of work to do.