BROOKLINE, Mass. — Chris Gotterup should be used to this.

Life moves fast, and his life of late has been moving at breakneck speed.

Never has that felt more apparent than in Thursday’s U.S. Open first round at The Country Club, Gotterup’s first experience playing a major championship after a decorated career as an amateur and collegiate star.

The 22-year-old Jersey Shore native found himself spiraling at 5-over par through his first six holes and it felt like his U.S. Open experience, with his family following every shot from outside the ropes, was blowing away in the blustery Boston breeze.

The nadir came on the 15th hole (his sixth of the round), where, staring at a 25-foot birdie putt to cut into the poor start that included bogeys on Nos. 11, 12 and 13, he four-putted for double bogey.

This is where Gotterup’s best weapon — his unaffected mental makeup — saved him. You have to do some serious digging to find much that bothers him, and even then, you might not find anything.

“There’s not much that goes on in my head,’’ Gotterup told The Post. “I consciously try not to think about too much. I’m not a guy that’s very analytical.’’

Instead of letting the poor start derail the highest-profile experience of his golfing life, Gotterup rallied to go bogey-free 2-under par on his final 12 holes to finish with a respectable 3-over 73.

“I’m upset that I started poorly, but happy with how I finished,’’ Gotterup said. “I put myself in the mix to play the weekend. That’s all I can ask for. It’s just been fun.’’ 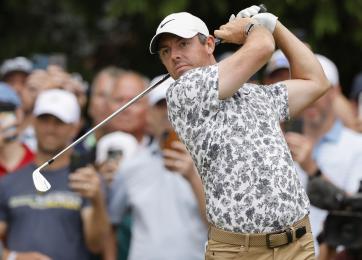 Fun is the reason Gotterup, who played at Rutgers for four years and at Oklahoma last year, began playing golf in the first place as a kid living in Little Silver, N.J., honing his game at Rumson Country Club while playing with his buddies and his dad, Morton.

“He doesn’t have a care in the world,’’ said Rutgers coach Rob Shutte, who recalled Gotterup writing the words “under-promise, over-deliver’’ on his head covers for matches.

“As a junior growing up, kids would finish a round and go to the range and work on their games and Chris was trying to figure out what he was going to order at Taco Bell,’’ Morton Gotterup said.

While he was back home at the Shore in the spring, he caddied a few loops over at Rumson.

“He’s not above that,’’ Brian Gaffney, the former Rumson club pro who taught Gotterup as a youngster, said. “Chris is astonishingly good. He has all the tools. The best part is he’s still — somewhere in there — just a kid. He doesn’t have a swagger that says ‘look at me.’ ’’

When Gotterup met for an interview in front of the players’ dining building, he came bounding down the driveway wearing a pair of Rutgers gym shorts, sporting the big red ‘R’ on them. He looked more like a college kid than one of the U.S. Open participants.

Though Gotterup recently turned pro after winning the prestigious Haskins Award as the most outstanding collegiate golfer and the Jack Nicklaus Award, fun is still the reason he plays the game. 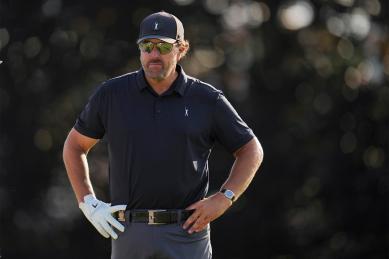 US Open: Phil Mickelson flops in first round since Saudi golf debut

“He was always a very nice young man, but he didn’t seem that interested in golf early on,’’ Gaffney said.

“I liked golf a lot growing up, but I just played for fun with my friends,’’ said Gotterup, whose best friend from those days, Ryan O’Connor, is his caddie. “Then I started getting good.’’

Morton Gotterup referenced a telling anecdote from Jason Birnbaum, the director of instruction at Manhattan Woods, who’s been Chris’ swing coach for the past seven years. Birnbaum took Chris to a practice round at the Travelers Championship a few years ago and at the end of the day asked him, “Chris, what did you think?’’

“I can beat these guys,’’ Chris told Birnbaum.

“And he’s not a kid that brags,’’ Morton Gotterup said. “He’s not intimidated by anyone. It’s not an arrogance, he’s just so … I don’t know anyone that’s more comfortable in their skin than my son.’’

That comfort was on full display on Thursday at The Country Club after that four-putt on 15 left him 5-over after six holes, and it’ll serve him well going forward.

Because after this week, Gotterup’s life continues to move forward quickly. He has a sponsor’s exemption into the Travelers Championship next week and another at the John Deere next month.

“If I can go out there and go put up a couple of good rounds on a U.S. Open golf course in front of U.S. Open fans,’’ Gotterup said, “that would be a big step in the right direction for me on this chapter.’’