MINNEAPOLIS — With 22 homers in the Yankees’ first 56 games, Aaron Judge is on pace to hit 63 home runs this season.

That won’t challenge Barry Bonds’ tainted record of 73, but some — including Roger Maris Jr. — might argue it would be the real MLB record.

Maris is among those who consider his father’s record of 61 home runs to be the legitimate major league mark, since every player that has surpassed it has been linked to steroids.

And if Judge gets close to Maris’ number, the late star’s son will be rooting for him.

“You don’t want to see anyone get it, but I’d be very happy if Judge did do it,’’ Maris told The Post by phone on Thursday. “Dad always said records are meant to be broken. You don’t want to see Dad’s record go, but if it happened, I can’t think of a better guy to do it. He’s a great Yankee. To do it in New York, how cool would that be? First we had [Babe] Ruth, then we had Dad, and then to have Judge, that would be pretty awesome. I can’t think of a better storyline.” 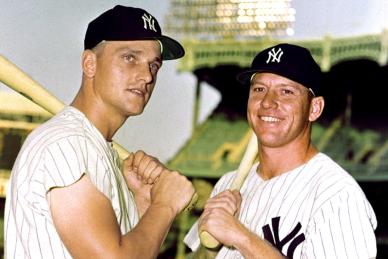 Perhaps one better storyline would be that instead of going for the American League record, Judge would be in contention for the major league record.

But despite the messiness of the steroid era that has tarnished the milestones set by Bonds, Mark McGwire and Sammy Sosa, MLB has no plans to reset the record book.

“We definitely feel Dad still has the record and I think the court of public opinion feels the same,’’ Maris said. “It’s not fair to Judge or anyone else going after 61, like [Giancarlo] Stanton when he hit 59 [in 2017], it should be celebrated like other iconic milestones. It’s gonna be huge in the city of New York and if Judge hits 62 it will be amazing, but it will be a disservice that it’s not the major league record.”

Still, should Judge keep up his current play and make a run at Maris’ 61, the sport would pay plenty of attention.

Maris has been watching since Judge made his debut and then hit 52 homers as a rookie in 2017.

And he added that, if anything, Judge could have made a run at 61 homers sooner.

“It’s not like we don’t expect this or look at it as an anomaly,’’ Maris said. “He’s capable of doing this year in and year out. Since he came into the league, like Stanton, too, I thought ‘Man, these guys are going to be hitting 60 home runs every year.’ They’re so big and powerful and good. It’s a surprise he hasn’t done it already.”

The difference this year is that Judge is healthy.

He’s also hitting homers at a higher rate than at any other point in his career.

Entering the Yankees’ game Thursday night against the Twins at Target Field, Judge had homered in 9.5 percent of his plate appearances. His previous high was 7.9 percent in 2020 and his career mark is 6.7 percent.

Not on that list is Maris, who made his run at Ruth’s record of 60 primarily in the second half of the 1961 season.

“To me the home run record is the greatest record in sports,’’ Maris said. “It’s the most exciting and it gets people talking about the game.”

Maris watches Yankees games from his Gainesville, Fla., home when he can and otherwise keeps up with Judge’s pursuit online.

If Judge ends up getting close to 61, Maris said he’d be happy to be around.

And he noted this could be a good year to do it: “Dad set the record of 61 in 1961 and it would be funny if Judge gets there on the 61st anniversary.”