You could argue forever whether momentum carries over from one game to the next in a best-of-seven playoff series while admitting copious evidence that proves both sides of the case.

There are teams that have mastered the principle of not getting “too high or too low” and that are able to stay “even-keel” throughout the crazy quilt of emotions that generally characterizes the playoffs. These are teams that understand that every game begins with the score of 0-0 regardless of the preceding contest’s outcome.

But there is little debate that a team can gain a foothold during a series, build its game piece by piece and ultimately impose its will on its opponent. And if the Rangers did not necessarily lose belief or confidence in their own ability, it surely seemed as if the Lightning rediscovered their formidable game and aura at home while squaring the series.

The question for the Blueshirts coming off those consecutive defeats in Tampa Bay in which they did not record a five-on-five goal and were outscored overall by 7-1 over the final 89:10, is whether they can elevate their game when the Lightning are either at or close to their best.

Of course. Of course if you had told the Rangers at the start of training camp they’d be in a best-of-three against the two-time defending champs with a trip at the Stanley Cup Final at stake and with two of those three contests at the Garden, they’d have asked where to sign up? No one would particularly have cared about the precise trajectory of the series. 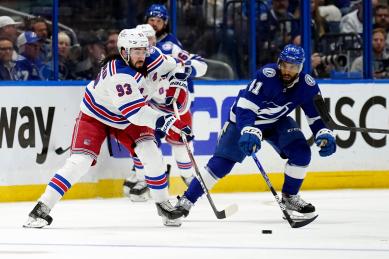 That’s where we and the Blueshirts are, 2-2 against the Lightning with Game 5 set for the Garden on Thursday and Game 7, if necessary, set for Broadway on June 14, an anniversary date that always rings a chord around these parts. In this context, the club’s third two-game losing streak of the playoffs seems a little less noteworthy.

The dichotomy between the home Rangers and the road Rangers could not be more stark through this tournament in which the team is 8-1 in New York and 2-7 in Pittsburgh, Raleigh and Tampa Bay.

It is primarily about five-on-five production. Since the start of the second round against Carolina, the Blueshirts had scored 21 goals at five-on-five. Sixteen were scored at the Garden. Five were scored on the road, with four coming in Game 7 in Raleigh.

Over those last 11 games, Filip Chytil leads the Rangers with six goals at five-on-five. Chris Kreider has three and Mika Zibanejad has two. Tyler Motte, Frank Vatrano, Andrew Copp, Ryan Strome, Kaapo Kakko, Adam Fox and K’Andre Miller have chipped in with one apiece. You may note that Alexis Lafreniere is not mentioned. That’s because he hasn’t scored at five-on-five since the start of the second round.

The Blueshirts exploded by scoring eight goals at five-on-five within the first 101:21 of this series against Andrei Vasilevskiy, but entered Game 5 with one in the last 138:39 as Tampa all but eliminated its egregious turnovers and developed an effective forecheck game that kept the Rangers pinned in their own end.

Head coach Gerard Gallant said that he hoped this would be a “homer series.” When he addresses that subject he should be taken seriously, given that even before Game 5 had been played in Carolina, Gallant had talked about the Rangers being able to win a Game 7 in Raleigh. Sometimes a premonition can equate to prescience.

The Rangers have never — as in, never — played a best-of-seven in which they prevailed by winning four games at the Garden. They last played a homer series in 1974, when they lost in seven to the Flyers in the Cup semis, the Blueshirts taking Games 3, 4 and 6 in New York while losing Games 1, 2, 5 and 7 at the Spectrum.

They have only won the opening two games of a best-of-seven at the (or any) Garden seven times, including this series. Before taking Games 1 and 2 from the Lightning, that hadn’t happened since 1994, when the Rangers took the first two at home in each of the first two rounds against the Islanders and Caps.

By the way, only once have the Rangers lost four straight after winning the first two at home. That was in the first round in 1968 when the second-place Blueshirts were beaten in six by the Blackhawks after taking a 2-0 edge. Schmautz!

The Rangers’ calling cards all year have been Igor Shesterkin and resiliency. The Blueshirts looked cooked after the fourth game in Pittsburgh, they looked done after the fifth game in Carolina. They were neither.

Because in hockey, sometimes momentum is the goalie.