LOS ANGELES — This year’s Home Run Derby will be held at Dodger Stadium, where the event’s two-time defending champion got into blast mode Saturday night.

Pete Alonso smashed two home runs, resurrecting an offense that had been silenced in the first two games of this series and ensuring the Mets would avoid the unchartered waters this season of a three-game losing streak.

The Mets rolled to a 9-4 victory, beating the Dodgers for just the sixth time in 30 games since 2017. Overall, the Mets hit four homers, matching a season-high they established in the home opener against Arizona on April 15.

“We just needed the win today,” Alonso said. “That’s a high-quality opponent and the past couple of nights were tough games and their pitching staff did a great job.”

Alonso hit a two-run homer in the third and three-run blast in the seventh to finish with five RBIs, tying him for the MLB lead with 53. Along the way he became the fastest Mets player to 50 RBIs, needing just 55 games. Alonso’s 16 homers are tied for the NL lead. 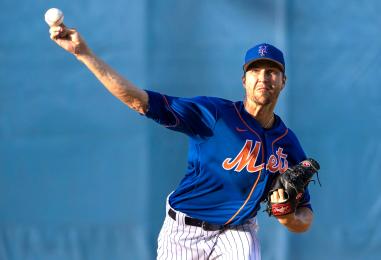 “Pete’s a strong man,” manager Buck Showalter said. “He collides with the ball, and it goes places you can’t defend it.”

The game was delayed before the start of the ninth as Dodgers manager Dave Roberts, with his team behind by five runs, attempted to insert outfielder Zach McKinstry into the game as a pitcher.

After a lengthy discussion, umpiring crew chief CB Bucknor announced that by rule a team must hold at least a six-run lead before a position player can be used to pitch. That led to another delay as right-hander Evan Phillips needed to warm up in the bullpen.

After an 11-minute break between innings, play resumed.

Francisco Lindor smashed a two-out solo homer on the ninth pitch of his at-bat in the first inning against Walker Buehler. The blast equaled the Mets’ scoring total from the previous two games combined. It was also a positive sign for Lindor, who returned to the lineup Friday (and went hitless) after fracturing his right middle finger in the double doors in his hotel suite earlier in the week. The homer was Lindor’s ninth of the season.

“[Buehler] struck out a couple of guys and you’ve got a somewhat negative vibe and the next thing you know you are ahead 1-0,” Showalter said. 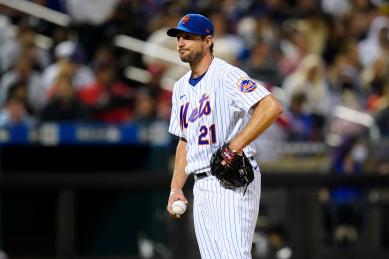 Mets’ Max Scherzer bitten by his dog on throwing hand

Alonso’s two-run homer in the third knocked out Buehler and gave the Mets a 5-4 lead. Buehler walked Patrick Mazeika and Brandon Nimmo in succession to start the inning and Starling Marte doubled in a run before Lindor’s RBI groundout sliced the Dodgers’ lead to 4-3. Alonso’s ensuing homer gave the Mets a lead they never relinquished.

Buehler’s start was the shortest of his career: the right-hander lasted only 2¹/₃ innings and allowed five earned runs on five hits with two walks.

But the Mets were hardly finished with the long ball after Buehler’s departure: Eduardo Escobar homered leading off the fourth. In the seventh, Alonso followed consecutive singles by Nimmo and Marte with a shot over the fence in right-center. The homer was Alonso’s third in two games and gave him seven in 11 games in this ballpark.

“It’s just one of those historic parks, a lot of history here,” Alonso said, when asked if there’s anything he likes about hitting at Dodger Stadium. “There’s been a lot of important names that have played here in the game of baseball, and it’s an honor to play here.”

Peterson was removed in the fourth after allowing four runs, three of which were unearned, on two hits and four walks with six strikeouts. Alonso’s throwing error in the second helped the Dodgers load the bases before Mookie Betts delivered a bases-clearing double that placed the Mets in a 4-1 hole.

Peterson walked Justin Turner leading off the inning and surrendered a single to Hanser Alberto before with one out Cody Bellinger hit a grounder that Alonso fired wide of second base, bringing in a run. Gavin Lux walked to load the bases for Betts with two outs.

Showalter allowed Peterson to face Betts with two outs in the fourth and a runner on base, but after a loud foul ball to left on the first pitch, changed pitchers. Holderman entered with an 0-1 count and struck out Betts to end the inning. Peterson was visibly upset as he left the mound with one strike on Betts.

“It was kind of a culmination of things — my goal is to go deep into games,” Peterson said. “It’s [Showalter’s] call. He made the right decision. Holderman got him out, and we got out of the inning.”