Oshane Ximines has an opportunity to put his best foot forward without anyone blaming him for the time he stepped across the line of scrimmage too soon.

Perhaps no one needed the “clean slate” new Giants head coach Brian Daboll promised after he was hired more than Ximines, a former starting outside linebacker who ended last season deep in the doghouse. Had the Giants not changed coaches, the 2019 third-round pick probably would have changed uniforms as a casualty of the cyclical bottom-of-the-roster turnover that happens around free agency and the draft.

“It has definitely rung a bell,” Ximines told The Post. “I’m glad I have the opportunity to learn from all these new guys in the building. The last two years didn’t go how I wanted.”

Rarely is a benching the result of one mistake, but that’s how it appeared after Ximines jumped offside during a Nov. 1 game to negate a late fourth-quarter interception and help turn a potential win into a loss against the Chiefs.

Ximines averaged 22 defensive snaps per game through the first eight games. He played one total defensive snap and was a healthy scratch in six of the nine games after the penalty.

“You know it hurt. I didn’t even have a jersey sometimes,” Ximines said. “But it’s a business. You have to wear your big-boy pants every day, so I didn’t look for [pity]. I just tried to go hard in practice, because I’m living my dream and nobody can take that from me.”

Ximines talked with coaches to see what more he could do, but the search didn’t turn up many answers. He understandably was stuck behind Azeez Ojulari, Quincy Roche and Ellerson Smith — three rookies in need of evaluation — but also behind teammates who clearly had no future with the Giants, like pending free agent Lorenzo Carter and scrap-heap additions Trent Harris and Jaylon Smith.

“It’s my second coaching change, and I felt rejuvenated the last time, too,” Ximines said. “The past is the past. You can’t do anything about it. It doesn’t matter what situation you are in or where you are on the depth chart: Every day is an opportunity to show what you can do. When guys start to get away from that, that’s when they start to go backwards.”

One job of new coaches is to look at old tapes to study the team before on-field work starts during OTAs. Sure, Ximines was conspicuously MIA from the final eight games of last season and most of 2020 (torn rotator cuff), but a deeper dive shows 25 pressures and 4.5 sacks as a rookie.

Which extreme is closer to what he will become? That’s why a clean slate is so important. 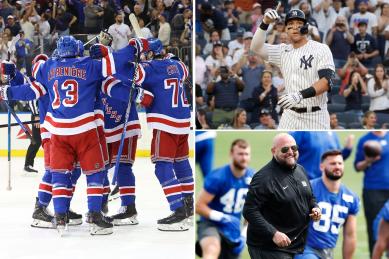 “You want to try to do it your way, be true to yourself, give the guys opportunities to be themselves, let them either get with the program or not get with the program,” Daboll said. “Sometimes it’s hard as a coach not to have any preconceived notions about players, staff, whoever it may be, because it’s such a small group. But I think everybody should be afforded that opportunity.”

The Giants are playing a more aggressive style of defense that might better fit Ximines’ style by asking rotational pass-rushers to attack more and do less. Ximines floated between the second- and third-team defense during OTAs.

“There is going to be a lot of opportunity to share the cake, so I’m excited to see how it goes,” Ximines said. “There is a looser leash on you. You can just go create pressure, and that’s always fun.”

The adage goes that a regime change usually is bad news for struggling former draft picks, because new bosses are not as invested in an inherited player’s development, making it easier to cut ties. This situation is the exception, where fresh eyes on a roster starved for talent could be a saving grace.

“I try not to look too far down the road, and that’s the recipe I’ve always had coming from Old Dominion,” Ximines said. “We didn’t have a lot of draft picks, but I took it day by day there and when I looked up I was where I wanted to be. That’s what I plan on doing right now. When the time comes, I feel like I’ll be where I want to be.”