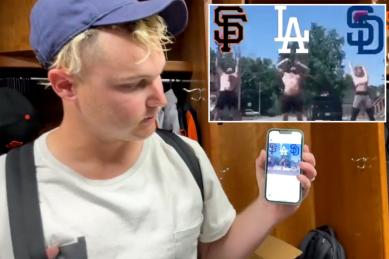 Angels superstar and fantasy football commissioner Mike Trout revealed details about the “legendary” — and controversial — league he helped start this past offseason.

In an dugout interview with ESPN on Sunday night, Trout disclosed info about the league which made its debut this year. The three-time MVP participated in the fun but didn’t win during the league’s inaugural year — the Astros’ Alex Bregman placed first.

The league gained notoriety when Reds outfielder Tommy Pham slapped the Giants’ Joc Pederson during batting practice on May 29 — all because of a GIF sent to the league’s group chat. Pham was suspended for three games for the slap.

“It’s the talk of the town right now,” Trout joked.

Trout added that there’s a waiting list for the league — which has a $10,000 buy-in for participants — with the Los Angeles center fielder being flooded with texts and calls about it.

After details about the league were uncovered, Pham ripped Trout for being the “worst commissioner in fantasy sports.” Trout responded, saying “every commissioner I know always get booed.”

“I’ll tell you right now, [the league is] probably getting another commissioner,” Trout said Sunday. “[But] I think we got something brewing for next fantasy football season.”