The Mets may have their two co-aces on the mend, but their stretched-thin rotation was dealt a blow Thursday evening.

Tylor Megill — making his second start since returning from a month-long bout with right biceps inflammation — departed his start in the fourth inning with right shoulder discomfort. He is slated to undergo an MRI exam Friday.

“Arm feels great and everything, then when something else decides to go like that, it’s obviously very frustrating,” Megill said after the Mets’ 5-4 win over the Brewers at Citi Field on Friday night. “I just want to be out there pitching, trying to help the team win. Injuries are pretty tough.”

Megill’s outing began in an auspicious manner. He faced the minimum across the first three innings, striking out five and retiring the lone base runner on a double play. His fastball flashed its typical upper-90s velocity, while his breaking ball looked particularly sharp.

But in the fourth inning, things unraveled.

Megill first felt discomfort to the fourth batter of the inning, Milwaukee’s Luis Urias. After allowing a single to Urias and walking Andrew McCutchen, Megill fired a 92.5 mph fastball — his slowest fastball of the evening — by Omar Narvaez. 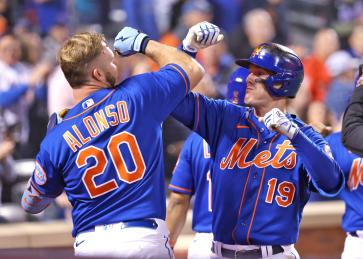 “That’s when I felt it more than before,” said Megill, who allowed four runs and struck out six in 3 ¹/₃ innings. “It’s just not worth it to keep throwing. Obviously, I wanted to, but I didn’t want it to blow up or anything.”

Megill says he feels the injury — which he described as tightness and discomfort — more so on the deceleration when he releases the baseball, rather than the actual throwing motion. Postgame, he noted that the injury had “died down” in some ways, and called it “very strange.”

“We’re hoping for some good news [Friday],” manager Buck Showalter said. “But he’s a tough guy. And he’s thinking of the team, of pitching as well as he’s capable of. We’re hoping to get lucky here.”

Megill, who is 4-2 with a 5.01 ERA on the season, returned from the injury list last Friday to start against the Angels in Anaheim.

A long-term injury to Megill would be another blow to the Mets’ rotation. Max Scherzer and Jacob deGrom are each progressing, but neither’s return is imminent. Scherzer, who is closer to a return, could potentially make a rehab start on Tuesday after throwing a successful simulated game Thursday afternoon.

Should Megill miss time, Trevor Williams would presumably slide back into the rotation. Williams has pitched to a 3.53 ERA in a swingman role this season, making five starts filling in for the likes of Megill and Scherzer.