The Mets have been excellent much of the season and had been just about perfect in their previous three games at Citi Field, all shutout victories.

They were not going to be perfect forever, but rarely this season have they been as imperfect as they were Wednesday night.

The Mets made Pete Alonso chase three misthrown balls that should have been headed for his glove, repeatedly missed locations on pitches and endured one of their worst innings of the season in a 10-2 loss to the Brewers at Citi Field in front of 25,422 fans who had little to applaud.

“We self-inflicted some things,” manager Buck Showalter said. “We’ve done that before and overcome it. … [Against Milwaukee starter Corbin] Burnes, there’s not much room for error.”

Making matters worse for the Mets (41-23) is the Braves have been perfect. Atlanta (37-27) won at Washington for its 14th-straight victory and pulled to within four games of the first-place Mets in the NL East. This is as close as the division has been since May 2, a result of the Mets going 7-6 this month while the Braves have yet to lose. 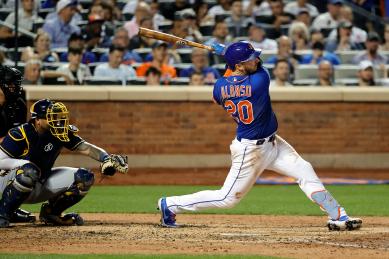 The Mets entered the fifth inning trailing 3-1 and might as well have brought shovels rather than gloves, to make it easier to bury themselves.

The Brewers sent 13 batters to the plate and scored seven runs, all with two outs, in an inning that required three Mets pitchers, included three walks and a hit by pitch and seemingly would not end.

Starter David Peterson was pulled after Willy Adames’ leadoff single. Jake Reed entered and after getting one out, tried to snap-throw to first, but the ball went awry and Adames advanced to second.

Reed walked Hunter Renfroe and hit Keston Hiura, around a strikeout of Luis Urias, to load the bases. Reed then walked Victor Caratini to force in a run.

Lorenzo Cain followed with a bouncer up the middle that might have gotten the Mets out of the jam, but Francisco Lindor could not field it cleanly, and it was ruled a hit. Jace Peterson sent a two-run double into the right-center gap to chase Reed, but Trevor Williams did not have much luck, either.

Singles from Adames and Andrew McCutchen made it 10-1, and one of the loudest cheers from Citi Field arose after pitch 53 of the frame, when Williams finally struck out Urias to mercifully end the inning.

Peterson, who went four-plus innings and was charged with four runs on six hits, struggled with control — including on a third-inning pickoff attempt that went into the dirt and allowed Urias to head to second.

The Mets’ throws were inaccurate all night, including when Jeff McNeil failed to complete a fourth-inning double play because the ball slipped out of his hand.

Their bats and decision-making were not much better. McNeil launched his fourth home run of the season, a solo shot to right, for the Mets’ first run in the fourth inning. His second RBI, two innings later, was bittersweet as he ended the inning — in which the Mets had just scored to cut it to 10-2 — when he was thrown out trying to stretch a single into a double.

“Sometimes your want-to gets in the way,” Showalter said. “Jeff’s a good baserunner. Tonight, he was one of the few guys who did some things offensively for us, so I’m not going to dwell on that.

Those two McNeil swings comprised the Mets’ offense against Burnes, who struck out eight and surrendered five hits in six innings. The Mets are eager for the days of Cy Young winners again taking the mound at Citi Field, but not when the reigning Cy Young winner is wearing a Brewers jersey.

The Mets swung and missed 11 times at Burnes’ cutter.

“Think Mariano Rivera as a starter,” said Showalter, the former Yankees manager, who added, “I did see Mariano as a starter.”

Because enough things did not go poorly for the Mets, they also pulled Starling Marte in the sixth inning after he was hit with a pitch in the right forearm.

X-rays were negative, the Mets said.