BROOKLINE, Mass. — A U.S. Open will be played this week at one of the most historic venues in golf, yet the talk around The Country Club on Monday was not about the third major championship of the year.

No. It was about LIV Golf, the Greg Norman-fronted, Saudi-backed tour that conducted its inaugural event last week outside of London.

This, of course, is not good for golf.

While I’ve been — and remain — adamant that PGA Tour players should have the right to play wherever they want to as independent contractors, the damaging by-product to this heavyweight bout between PGA Tour commissioner Jay Monahan versus Norman is the division that’s taking place in the sport among the best players in the world.

This has become a “one-or-the-other” choice when it doesn’t have to be.

How long this division remains in place — and it’s going to get worse before it gets better as more PGA Tour players will chase the Saudis’ bottomless money pit — isn’t known, and that has many of the top players disturbed.

At the top of that list is Justin Thomas, who’s been one of the strongest voices defending the PGA Tour in its battle with LIV Golf. Thomas on Monday spoke with passion about his concern with where this is going, using the word “sad.’’

Thomas, who was outlasted by Rory McIlroy in Sunday’s final round of the RBC Canadian Open, called it “a big week for the Tour,’’ because it was going head-to-head with LIV’s first event, Thomas and McIlroy are two of the Tour’s biggest draws and they put on a hell of a show. 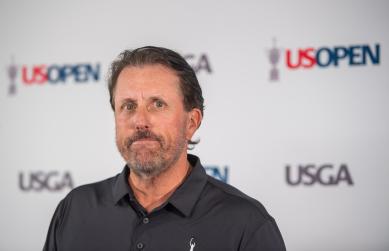 ‘How can you live with yourself?’: Phil Mickelson won’t escape new legacy

“I tossed and turned and lost a lot of sleep last week thinking about what could potentially happen,’’ Thomas said. “I grew up my entire life wanting to play the PGA Tour, wanting to break records, make history, play Presidents Cups, play Ryder Cups. The fact that things like [the product of the PGA Tour] could potentially get hurt because of some of the people that are leaving, and if more go, it’s just sad. Everything has got a price, I guess.’’

Those prices have been staggering, with Phil Mickelson reportedly being paid $200 million, Dustin Johnson $125 million and Bryson DeChambeau $100 million.

“It’s astronomical money that they’re throwing at people,’’ Thomas said. “There’s going to be some kind of number that’s going to get people to think about it, and they’re reaching that number with a lot of people. Selfishly, I don’t want anybody to leave.’’

Mickelson on Monday made it clear his preference is not to be estranged from the PGA Tour, that he hopes one day to continue playing PGA Tour events as well as LIV Golf events.

“I’ve worked hard to give back to the PGA Tour and the game of golf throughout my 30-plus years of professional golf, and … through my accomplishments on the course, I’ve earned a lifetime membership,’’ he said. “I intend to keep that and then choose going forward which events to play and not. My preference is to be able to choose which path I would like, one or the other or both.’’

Thomas said one of the things that bothers him about the rush of publicity LIV Golf has gotten is that it’s taking attention away from the U.S. Open.

“You can’t go anywhere without somebody bringing it up,’’ Thomas said. “It’s sad. This is the U.S. Open, and this is an unbelievable venue, a place with so much history, an unbelievable field, so many storylines, and yet that seems to be what all the questions are about.