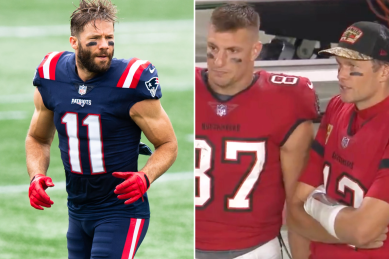 Edelman seemed to leave the door open about potentially coming out of retirement during an appearance at the Sunset Sports Media Festival in Zadar, Croatia over the weekend.

“I don’t know, we’ll see,” Edelman said when asked if he’ll return to play in the NFL with his former teammate, Buccaneers quarterback Tom Brady.

“That’s called a little teaser. We’ll see. We’re staying in shape but you never know. But I’d probably go back to the Patriots. I love the Patriots. Foxborough Forever.”

Edelman, 36, spent the first 11 of his 12 NFL seasons playing alongside Brady in New England, where the quarterback-receiver duo won three Super Bowls together. Their bromance on and off the field was beloved by fans in Foxborough, and the pair has remained close.

Edelman announced his retirement last April, and later that month revealed he was joining Showtime’s “Inside the NFL” to begin his post-playing career.

At the time, Brady joked about Edelman being a free agent, which sparked speculation that he’d join the quarterback in Tampa Bay — just like former Patriots tight end Rob Gronkowski, who came out of retirement to reunite with Brady in Tampa in April 2020.

Edelman, though, twice shut down the idea of a Brady reunion, and maintained that he has no regrets over his decision to hang up his jersey for good. He played only six games in 2020 due to a chronic knee injury, which ultimately led to his decision to retire.

Nonetheless, Edelman’s latest comments in Croatia — at the 2022 Weekend Media Festival with Hall of Fame linebacker Ray Lewis — seem to be the first of their kind.

Brady, meanwhile, is gearing up for his 23rd NFL season, and his third with the Buccaneers. The seven-time Super Bowl champion announced the end of his short 40-day retirement in March to return to Tampa Bay to take care of some “unfinished business.”