It would be easy for Braxton Berrios to sell Zach Wilson in Year 2 to Jets fans.

He could talk about the chemistry he developed so quickly with his young quarterback a year ago, and the camaraderie and bond that has blossomed between them when they aren’t playing catch.

But he won’t. Because he believes he won’t have to.

“I truly don’t think I have to sit up here and sell the quarterback on why people have to be excited,” Berrios said. “I think last year, you see the first half and the second half of the year, and I think that paints the picture.

“I’m not gonna sit here and sell him, he’ll sell himself, and I’m excited to play with him.”

General manager Joe Douglas has done everything in his power, short of acquiring Tyreek Hill or Deebo Samuel, to help Wilson sell himself, because the second-year franchise quarterback will either pilot head coach Robert Saleh’s Jets to take flight, or remain grounded on the tortured tarmac.

Until the regular season begins, you will hear mostly happy talk from all 32 NFL teams (though there are no happy beginnings right now for Deshaun Watson and the Browns, nor should there be): So-and-so looks great, so-and-so is finally healthy and vows he will silence the doubters, the atmosphere is lighter with the new head coach, the new system is player-friendly, the culture in the building has never been better, and so on and so forth.

“It’s a different world coming into Year 2 in the NFL. … Nothing is truly new to him,” Berrios said, “and he looks obviously a lot more comfortable, everything’s a little bit quicker, and he obviously commands the huddle really well.”

While the Giants’ Daniel Jones learns another new system under another new head coach and offensive coordinator, nothing has changed for Wilson, other than fewer voices in the quarterbacks room. 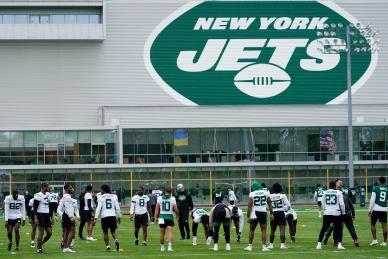 One of those voices, quarterbacks coach and former East Islip High quarterback Rob Calabrese, is optimistic enough about Wilson that it was a big part of the reason why he resisted overtures from Kentucky as offensive coordinator to stay.

“You see what you see on tape, how talented he is,” Calabrese said. “He is a football player, he’s a quarterback that can make any throw on the field, he can extend plays with his feet.

“Now he’s gonna come back and be able to play the quarterback position the right way.”

“I think he’s a lot more comfortable in the offense,” Saleh said. “I think he’s committed to the process of taking the snap and going through the progression, understanding exactly where his eyes need to go on every snap. Now it’s just a matter of just trusting what he sees — you could feel the comfort and he’s still got a long way to go, but at the same time you can see exactly what we’re hoping for in terms of him coming back having better command of the offense, better confidence in his progression.”

Get the insider’s view on Gang Green

Sign up for Inside the Jets by Brian Costello, a weekly Sports+ exclusive.

With Jamison Crowder now in Buffalo, opportunity knocks in the slot for Berrios.

“Whenever whatever. I think I can do anything they need me to do,” he said.

In Braxton they trust.

“There’s a comfort level with Braxton, knowing that he’s gonna be exactly where he needs to be every single play, and I think that’s comforting not only for the coaches but it’s comforting for the quarterback to know that Braxton’s on the field, of all the guys I know he’s gonna be where he needs to be,” Saleh said. “It’s easy to get people the football when you’re confident in them.”

“I pride myself on being the same guy every day,” he said.

As does Zach Wilson.

He’ll be everybody’s guy if he sells himself.