BROOKLINE, Mass. — It already has been a magical year for Cameron Young, the 25-year-old from Scarborough who played his youth golf at Sleepy Hollow Country Club, where his father, David, is the longtime head pro.

He has had two runner-up and two third-place finishes, soared up the world rankings list (he’s currently No. 31) to qualify for the Masters, PGA Championship (which he nearly won, tied for the lead on the 14th hole in the final round) and this week’s U.S. Open.

During the second round Friday, Young looked on his way to a missed cut, standing on the tee at the par-3 sixth hole at 8-over, five shots below the projected cutline.

He proceeded to ace the 165-yard par-3 sixth hole with an 8-iron to move to 6-over with three holes to play and a chance.

It was the 48th known hole-in-one at a U.S. Open, according to the USGA, and the first ever at The Country Club.

Young followed the ace with birdies on Nos. 7 and 8 to get to 4-over entering his final hole of the round needing birdie to make the cut at 3-over. He parred the ninth hole to miss the cut by a shot.

The killer hole in his round and tournament was the quadruple-bogey 8 he took on the par-4 third hole Friday.

Adam Hadwin was borderline euphoric on Thursday evening about his start to the U.S. Open, shooting an opening-round 66 and taking a one-shot lead into Friday’s second round.

“No one can take that away from me,’’ the 34-year-old Canadian said Thursday of having the first-round lead in one of the most prestigious tournament in golf.

Well, The Country Club nearly did take it away from Hadwin on Friday as he saw his 4-under score evaporate to even par in the middle of is round before he rallied to birdie his final two holes to get back to 2-under. That kept him in contention entering the weekend searching for his first career major championship win just three shots off the lead.

“It was one of those days with where the round was going — I didn’t really have anything going,’’ Hadwin said “Personally, I hope the golf course continues to get tougher. The way that I’m playing it just suits me.’’ 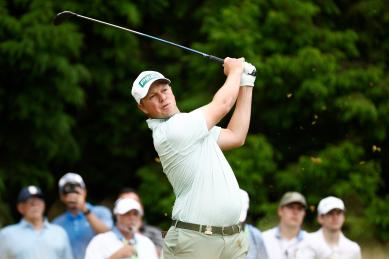 Just four of the 14 players in the field who are a part of the Greg Norman-led LIV Golf series made the cut: Dustin Johnson, Bryson DeChambeau, Patrick Reed and Richard Bland. The 14 players combined to be a total of 64-over. Of the 12 players who participated in LIV Golf’s first event last week outside London (DeChambeau and Reed didn’t play), just two made the cut.

At the time Johnson was finished with his 73 on Friday, little-known South African MJ Daffue was leading the tournament.

“The one guy that was leading for a little while, obviously playing well, but it’s a U.S. Open and you get a lot of different players in here,’’ Johnson said, clearly not remembering Daffue’s name. “It’s cool to see. It always happens here. Obviously, come Sunday we’ll see what the leaderboard looks like.’’

Matthew Fitzpatrick, who won the 2013 U.S. Amateur at The Country Club, had a roller-coaster round, making the turn in 3-under and bogeying Nos. 2, 3 and 4 to fall to even par before making a late rally to get back to 2-under — with an even-par 70.

“Three of my four bogeys were all three-putts, so that’s kind of sums up the day,’’ he said. “I just didn’t putt well enough today. I don’t know what it was. I just couldn’t really see anything going in. I feel like I’ve left a couple out there, which to say in a U.S. Open is pretty rare, but it is positive going into the weekend.’’

Travis Vick, one of the latest University of Texas golf studs, is the low amateur in the field at 1-under, only three shots out of the lead, after shooting 69 on Friday.

It should come as no surprise to see Sam Burns (-2) in contention this week — even though he’s never won a major. Burns, who’s best friends with Scottie Scheffler, with whom he’s sharing a house this week, has won three times on the PGA Tour already this season and seems to be in the mix every week.

“I am a little upset he’s beat me by one,’’ Burns joked of Scheffler. “But it’s cool to see him playing well. Obviously, he’s had a fantastic year, and it’s kind of motivated me to try to play a little bit better and try to keep up with him.’’