The Yankees’ bats picked up Gerrit Cole on Thursday night.

On Friday, the Yankees’ pitching — and especially their spotless bullpen — returned the favor.

Six relievers combined for seven scoreless innings, the last four of which included ghost runners on second base, in the Yankees’ 2-1, 13-inning victory over the Cubs in The Bronx.

The Yankees played their longest game of the season because their offense needed 13 innings to break through, and their bullpen did not budge,continually giving the sluggers another shot at a second run.

Miguel Castro, Michael King, Clay Holmes, Clarke Schmidt, Wandy Peralta and Ron Marinaccio (who earned his first career victory) followed an excellent Luis Severino (six innings, one run) and allowed just two hits while recording 21 outs. Yankees relievers have not allowed a run in their past 14 ²/₃ innings. Before the late games had finished Friday, the Yankees bullpen’s 2.92 ERA was the fourth-best in baseball.

“Our bullpen did what they’ve been doing,” catcher Jose Trevino said after stroking the game-winning single. “Coming in, throwing up zeroes, giving us a chance to win the game.”

The biggest performances came from Schmidt, Peralta and Marinaccio, lower-leverage arms further down the depth chart who inherited modern-day baseball jams and pitched their ways out of them. 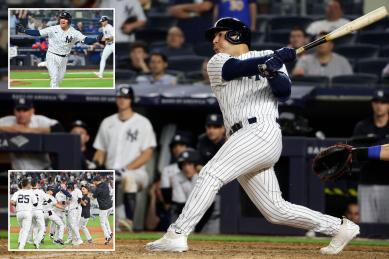 Schmidt was the first to be tested in extra innings. In his first spotless frame, the 26-year-old swingman induced two ground balls to get three outs. Willson Contreras grounded sharply to Isiah Kiner-Falefa at short, before the Yankees intentionally walked Ian Happ. Schmidt then got Frank Schwindel to ground to third, and DJ LeMahieu started a nicely turned double play to escape.

In the 11th, Schmidt’s glove was the star. With one out, Rafael Ortega lined one right back to the righty, who quickly caught it, spun and threw a strike to second base for an inning-ending double play.

Schmidt, who already has been optioned once this season and owns a fringe roster spot, walked off the mound with a couple of fist-pumps.

“The bullpen was terrific again,” said manager Aaron Boone, who pointed out Schmidt had thrown 33 pitches in relief Wednesday.

In the 12th, Peralta pitched a perfect frame that also required some defensive ability. With two outs and a runner on third, Nick Madrigal hit a comebacker that the lefty knocked down. Peralta turned, chased the ball behind the mound and threw to first with a second to spare.

Marinaccio had to face the top of the Cubs’ order in the 13th. After walking a batter, he got Contreras to foul out and Happ to bounce out.

With the potential go-ahead run 90 feet away, the 26-year-old rookie threw a nasty slider to P.J. Higgins for the final strikeout. While Schmidt had the fist-pump, Marinaccio pounded his fist into his glove.

Holmes sunk his ERA to a stunning 0.31. Castro was solid again. After a rough patch, King has returned to his unhittable self.

But the other relievers were the biggest difference-makers Friday.

“To get to the playoffs and get to the World Series,” Severino said, “we need everybody.”